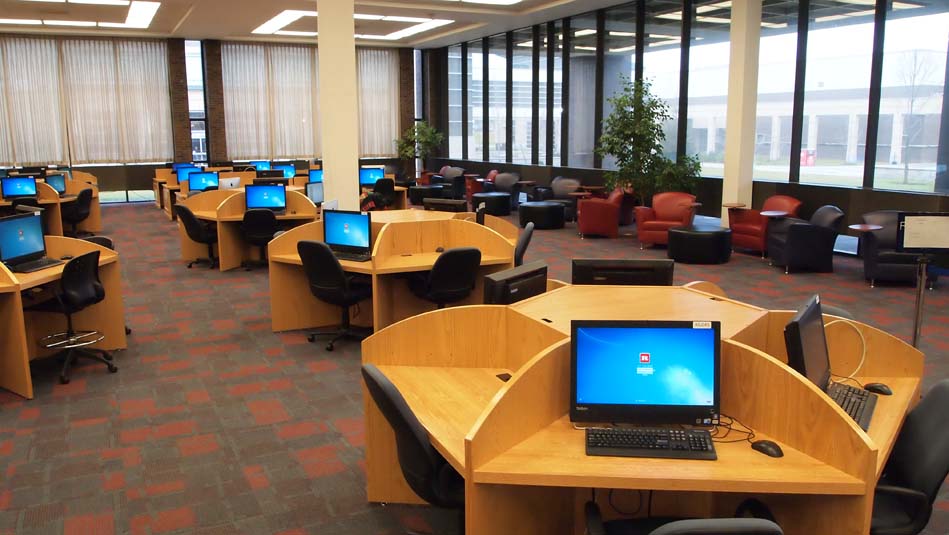 The increased use of the Carr Library in general, and specifically the computer lab, prompted the staff at the Rutgers Libraries and OIT to come together to address growing demand for comfortable computing space in the Carr Library. Plans and infrastructure work for the Carr Library Lab expansion project developed methodically throughout the year.

This long-established facility was relocated, expanded and improved during Spring Break 2012. It now has six times the space as before. The lab is now a predominant feature as you enter the library, taking up most of the front section of the first floor of Carr Library. The new Carr Library Lab is now located along the entry window wall, with a beautiful view of the new Livingston Campus, looking upon the new Livingston Student Center and Dining Commons.

available for students, faculty, and staff to use. This is nearly double the number of OIT computers that were previously available in the Carr Library Lab.

All stations are equipped with extra electrical outlets on each desktop.

The Carr Library Lab includes four (4) black and white printers allowing patrons to print from both OIT computers, as well as the computers managed by the Libraries. This is one more than the Carr Library Lab previously had, marking a 50% increase in available printers for patrons. Please click here for more on printing in the Labs (including our PrintGreen Conservation Program).

We Want to Hear Your Feedback!

The Rutgers Libraries and the Office of Information Technology have put a lot of time, planning and effort into making the Carr Library Lab a more comfortable environment, suitable for students, faculty and staff to study and collaborate on coursework and projects. Please share your feedback on your experiences in the Carr Library Lab (or any of of the other OIT Computer Labs) by completing our short survey below.

As an added bonus, if you complete the survey, you will be entered into a random drawing for a $25 gift card for Barnes & Noble!

Take the OIT Computer Lab Survey, and enter for a chance to win today!

Questions/comments regarding the OIT Computer Labs can be directed to: feedback@computerlabs.rutgers.edu